This guide was prepared for the Think Forum Lecture Series by Prof. Jay Famiglietti on Tuesday, April 4, 2017. The topic being explored by Prof. Famiglietti is “Can We Solve the Global Water Crisis?" 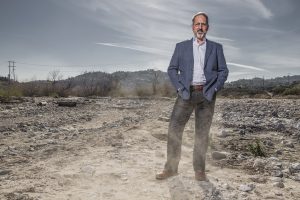 Professor Jay Famiglietti is a hydrologist and the Senior Water Scientist at the NASA Jet Propulsion Laboratory (JPL) at the California Institute of Technology. He was appointed to the California State Water Boards by Governor Jerry Brown in 2013.

From 2001 to July 2016, he was a professor of Earth System Science and of Civil and Environmental Engineering at the University of California, Irvine (UCI). He was the Founding Director of the UC Center for Hydrologic Modeling at UCI. Before joining the faculty at UCI, he was a professor in the Department of Geological Sciences at the University of Texas (UT) at Austin, where he helped lunch the UT Environmental Science Institute.

Prof. Famiglietti's research focuses on how the water cycle and freshwater resources are being impacted by climate change. His research group develop advanced computer models and use satellite remote sensing to track water availability around the globe. Recently, his group has pioneered methods to identify unsustainable and fast groundwater depletion in the world's major aquifers.

Prof. Famiglietti is a regular advisor to the U.S. Congress and the California Governor's office on water availability and water security issues. He has been actively raising awareness of water and climate change issues and is an avid speaker. His work has been featured in many international news media and prestigious academic journals. He was featured as an expert in the water documentary Last Call at the Oasis (Participant Media, 2012).