The Kelvin Smith Library provides the campus community with access to world-class research collections, technology-equipped classrooms and meeting spaces, state-of-the-art digital resources and a café.  In support of the Cleveland Humanities Festival the library offers a selection of resources accessible in this series of Research Guides.

This guide was prepared for the presentation by Carole Newlands, Professor of Classics at the University of Colorado, Boulder

Ovid, Actaeon, and the Truths of Myth 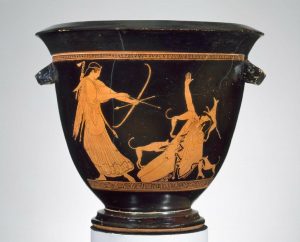 This event is part of the 2020 Cleveland Humanities Festival: TRUTH

Myth has often been used to express truths that are too dangerous to be stated in the open. An example is the myth of Actaeon, the story of the young hunter who is punished for stumbling upon the goddess Diana bathing. This has proved to be one of the most enduring and controversial of the narratives told by Ovid in his epic poem Metamorphoses— controversial for his version emphasized not, as was customary, Actaeon’s intentional violation of the goddess’s private space, but rather his innocence. The same myth was framed in personal terms in Ovid’s later poetry, written in the period of his political exile, as an example of unjust punishment by autocratic powers. In her talk Carole Newlands, Professor of Classics at the University of Colorado, Boulder, will explore the tension between voyeurism and victimhood that runs through the Actaeon myth in literature and the visual arts from Ovid to the present, as artists and writers have continued to engage with the controversy raised by Ovid in his narrative of Actaeon, thus demonstrating the enduring importance of myth in exploring broader political and cultural truths.

This event is co-sponsored by the Department of Classics.

Carole Newlands (Ph.D. Comparative Literature Berkeley). Carole Newlands’ current principal areas of research are Augustan and post Augustan poetry; she has also strong interests in late Antique and Medieval poetry, and in the reception of classical texts. She has held research fellowships at Clare Hall Cambridge and at the Institute for Advanced Studies, Princeton, as well as fellowships from the ACLS, NEH, and the Loeb Classical Library Foundation. She has been a visiting NEH Professor at the University of Richmond; William Evans Fellow at the University of Otago, New Zealand; and a research fellow at the Center for Humanities, the National University of Australia. She is the author of numerous articles on classical and medieval literature. Her first book was on Ovid’s Fasti: Playing with Time: Ovid and the Fasti (Cornell University Press 1995), and she continues to publish on Ovid’s poetry. Recent work includes the monograph Ovid in I. B. Tauris’ Understanding Classics series (2015); and The Wiley-Blackwell Handbook to Ovid, coedited with John F. Miller (2014). Her recent work on Statius includes two monographs, Statius’ Siluae and the Poetics of Empire (Cambridge University Press, 2002), and Statius: Poet between Rome and Naples (Bristol Classical Press: 2012); a commentary on Statius Siluae Book 2 for the Cambridge Greek and Latin series (2011); and she has co-edited with William J. Domink and Kyle Gervais the Brill Companion to Statius (2015). Among her current projects is a book in progress entitled Scotland and the Classics: Poetics, Translation, and Cultural Identity.