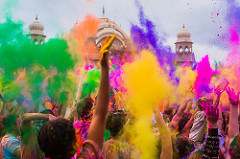 Holi, also known as Plagwa, Dol Purnima or Gaura Purnima, is an ancient Hindu festival. Today it is a festival of colors and is one of the most popular festivals in India. People toss powder and water balloons to welcome the arrival of spring. It begins on Purnima, full moon day, in the Hindu Month of Phalguni (Febaury/March) and can last from two days to as long as 16 days. Holi is an official holiday in all the states of India except those in the far south and far northeast.

During Holi, water guns and balloons filled with watercolors are squirted or thrown on family, friends and strangers. India's streets are "overtaken by crowds awash with colored powder," and people sing, dance and play to celebrate.

Bonfires are set up in many communities on the eve of Holi. An effigy of demoness Holika, sister of the king of demons, is burned. Holi is also a celebration for the God of Love and creates a perfect environment for young people to find mates and families to seal marital agreements.

Holi celebrates love, forgiveness, and triumph of good over evil, and is observed wherever there are people of Indian descent.

Children's books, like the ones listed below, are available from nearby public libraries.