The Kelvin Smith Library of Case Western Reserve University has been a Congressionally designated federal depository for United States Government publications since 1913.

KSL's government documents collection is located in the only stacks on the second floor, in front of the Flora Stone Mather research commons. 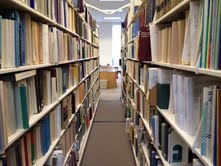 The best way to find government documents in the KSL collection is to use the KSL catalog.

If you already know the title of the document you are searching for, use the Advanced Search on the catalog with a title search.

If you already know the Call Number of the document you are searching for, use the Government Document Call Number Search page.

Organization of the Collection

United States Government publications are classified by the Superintendent of Documents (SuDoc) Classification System. This system was developed in the library of the Government Printing Office between 1895 and 1903. Like other classification schemes, the SuDoc system has expanded as the size and scope of the federal government has expanded.

The SuDoc system groups publications by government author. Government authors are federal departments, bureaus or agencies of the United States. Since the SuDocs system reflects the organizational structure of the federal government, government reorganization creates changes in the call number system. Thus, some series of publications can be located in several different places within a collection.

From the following illustration the searcher can know that this publication is a serial-specific issue 83-87 of the Federal Aviation Administration, U.S. Department of Transportation.